BBNaija’s Gifty mocks End SARS protesters; accuses them of ‘wasting lives all because of protesting’.

Former Big Brother Naija housemate, Gifty Powers has mocked End SARS protesters while accusing them of wasting lives in the name of protests.

After multiple lives were lost following days of protests calling for an end to police brutality in Nigeria, the former reality star took to Instagram to put the blame on the End SARS protesters. She also told protesters that it’s “too late” now because they’ve “woken the lion up.”

She added: “When you are praying to God eh, pray for wisdom too.

“It’s too late… you all have woken the lion up…

“Ok did your protest bring back the dead? Una wan do wenti America don do… Don’t compare Nigeria with America ooo… there is a great giant difference…

“Nooo they shouldn’t stay home ooo… the protest should continue.”

“When I was saying that everyone should go home in one piece, dem say I dey talk like mad woman… Oya naa see the result here… Everything in this life no be gra-gra ooo.. Life na planning…

“All the shouting wey una do, e bring back the people wey don die? No. So why waste more lives all because of protesting…” 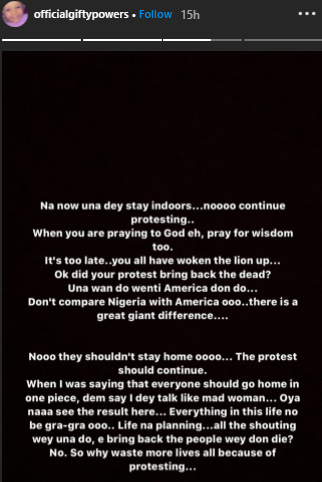 Cashier in court for allegedly stealing N500,000 from employer